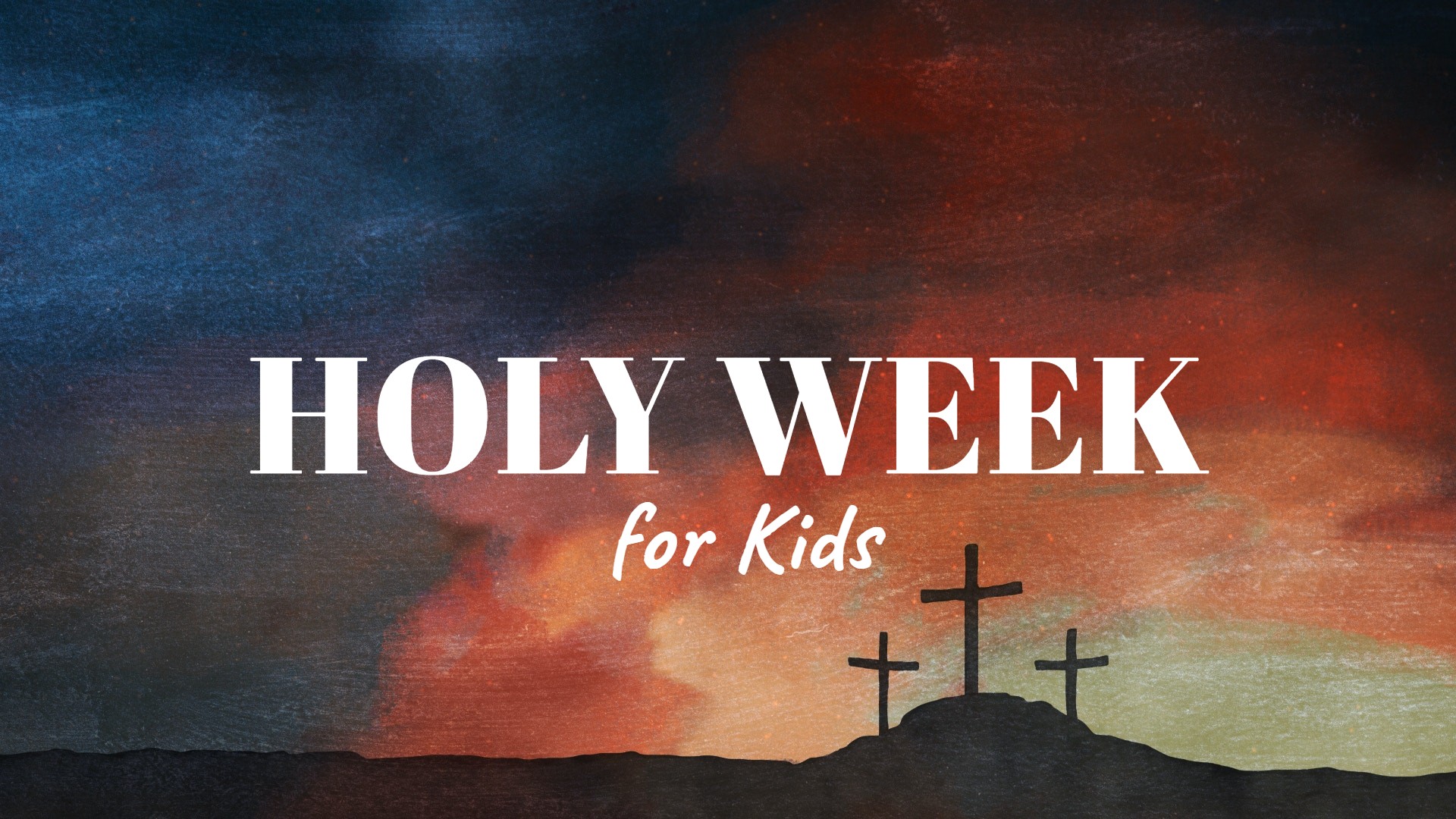 Mary, along with her sister Martha and brother Lazarus, were friends of Jesus. Jesus had raised Lazarus from the dead, and many people believed in Jesus because of that amazing miracle (John 11). Mary liked to sit at Jesus’s feet and listen to Him teach (Luke 10:38-42). With just a few days left before Jesus’s death, she sat and poured special perfume on His feet and wiped them with her hair. She wanted to worship and honor Jesus with everything she had. The perfume cost a lot of money; it was an expensive gift. But Jesus freely gives us everything. He gave the most expensive gift ever. He offered Himself as a sacrifice so that we can have eternal life. Jesus is worthy of any gift or praise we can offer Him.

Story:
For a long time—hundreds of years—God’s people had lived through hard times and were waiting for someone to rescue them. God had promised through special messengers called prophets that a Messiah, a King descended from King David, would come to be their Savior. God even told them exactly how the Messiah would arrive, riding on a donkey. And now, finally, He was here! Jesus rode into Jerusalem on a donkey, just like God had promised. People were very excited that their Savior had come. They laid their coats and palm branches on the ground to make a soft path, and they shouted out praises to Him. They yelled “Hosanna,” a word that means “Please save us!” Jesus had come to save them, but He would save them in a way that was so much better than they could imagine.

Story:
The religious leaders in charge of the temple had made it harder for people to worship God. The temple was God’s house, which means it was also Jesus’s house. Jesus went into the temple and cleaned it up so that people could focus on worshiping and praying to God. Jesus also proved that He was God’s Son by performing miracles. A miracle is something wonderful that only God can do. Jesus healed people who couldn’t see or couldn’t walk. The kids who were in the temple were so excited to see Jesus and His miracles that they shouted out praises to Him.

Story:
Jesus taught the people using many parables. A parable is a story that teaches a lesson. Some of the religious leaders were listening, and they did not like what Jesus was teaching. They thought they were really smart and important, so they tried to trick Him. They asked Jesus hard questions about God’s law, trying to catch Him saying something wrong. But Jesus knew all the answers, and He never said or did anything wrong. Jesus taught them that the whole point of the law is for us to love God and love each other.

Story:
The religious leaders didn’t believe Jesus was the Messiah, and they wanted to get rid of Him. There were a lot of people in Jerusalem for the Passover holiday who did like Jesus, so the leaders planned to wait until after Passover to arrest Him. That way, the holiday crowds would not see them do it. But Judas, one of Jesus’s 12 disciples, offered to help them find Jesus and arrest Him at night, away from the crowds. The leaders were happy about this and agreed to pay Judas 30 silver coins for betraying Jesus. They thought they were being sneaky, but Jesus knew what they were doing because it was all a part of God’s plan.

Story:
People in Jesus’s day wore sandals and walked on roads that were dusty or muddy, so their feet got very dirty. Washing feet was a job that usually only the lowest servant would do. When Jesus gathered with His disciples for one last meal together, He surprised them by washing their feet. The disciples didn’t think someone as important as Jesus would wash feet, but Jesus told them that He washed their feet to be an example for them—and for us—to follow. Jesus wants us to humbly serve other people just like He did.

Story:
Jesus was betrayed by Judas, arrested, and put on trial. Jesus had never done anything wrong, so the judges could not find a reason to punish Him. However, the leaders who had arrested Jesus stirred up the crowd against Him, yelling that Jesus should be crucified—hung on a cross to die. Jesus had the power to save Himself from the cross, but He didn’t. This was God’s plan all along. Jesus, the only person who never sinned, took the punishment for everyone else’s sin because He loves us so much. When Jesus died, the curtain in the temple was torn in two, showing that people no longer had to be separated from God. When we admit we are sinners, believe Jesus paid for our sins on the cross, and trust Him with our hearts, we are forgiven and can be friends with God!

As we cover the events of Holy Week, we know that Jesus died on Good Friday and was buried that evening (Matthew 27:57-61). And we know that He rose from the grave on Easter morning (Matthew 28:1-10). But what happened in between those days is less clear. Where did Jesus go on Holy Saturday?

The Bible doesn’t give many details about what happened that day, other than the fact that the tomb was guarded and sealed (Matthew 27:62-66). On Saturday, Jesus’s body was in the tomb.

However, on Good Friday, as Jesus was hanging on the cross, He told one of the criminals being crucified beside Him, “Truly, I say to you, today you will be with me in paradise” (Luke 23:43). And then, as Jesus died, He called out, “Father, into your hands I commit my spirit” (Luke 23:46). So, although Jesus’s dead body was in the tomb, His spirit went to be in paradise on Friday.

Right now, some of you may be wondering: if that’s the case, why does the Apostles’ Creed say that Jesus “descended into Hell” between His death and resurrection? Well, buckle up, because we’ve got some explaining to do.

Although it is common to think of “Hades” as just a more polite-sounding term for “Hell”—the “lake of fire” or “second death” where unrepentant sinners will be punished for all eternity—that is technically not the case. We know that Hades and Hell are not the same place because Revelation 20:14 says that “Hades” is thrown into “the lake of fire” at the final judgment. So, you could say that Hades becomes part of the lake of fire, but it is not that way initially.

There are a couple of places in Scripture that suggest Jesus went to this “place of the dead” between His death and resurrection. One of those is Ephesians 4:8-10:

“Therefore it says, ‘When he ascended on high he led a host of captives, and he gave gifts to men.’ (In saying, ‘He ascended,’ what does it mean but that he had also descended into the lower regions, the earth? He who descended is the one who also ascended far above all the heavens, that he might fill all things.)”

The phrase “he had also descended into the lower regions, the earth” could refer to Jesus coming down to earth and living as a human (Philippians 2:5-7). However, other translations instead say that He “descended into the lower parts of the earth.” That suggests that Jesus went down not to earth, but into the earth, to “the place of the dead.” The Bible repeatedly says that Sheol/Hades is a place that people went “down” to (Job 21:13; Luke 10:15), so calling it “the lower parts of the earth” would make sense.

And then 1 Peter 3:18-20 and 1 Peter 4:5-6 talk about Jesus going “in the spirit” to “the spirits in prison” and preaching the gospel “even to those who are dead.” Again, this is not 100 percent clear, but it seems likely that Jesus went in spirit to “the place of the dead” between His death and resurrection, preaching to those who had already died. Those on the good side of Hades/Sheol had trusted God and were considered righteous before Jesus came (Genesis 15:6; Hebrews 11:1-40); He was able to proclaim to them the good news that He had paid for their sins on the cross. When Jesus told the criminal on the cross that “today you will be with me in paradise,” He may have been referring to this good side of Hades/Sheol.

Remember that the Apostles’ Creed is not Scripture. Although it is a helpful reminder of the core truths that all Christians should be able to agree on, it is not infallible, and this difference in wording is a prime example of that.

Saying that Jesus “descended into Hell” can give the impression that Jesus was punished in Hell for our sins, but that is not the case; He paid for our sins fully on the cross, and stated at His death that “It is finished” (John 19:30). We are saved by His blood (Ephesians 1:7), and not by any actions of His spirit after death.

Also, saying that Jesus preached to the dead does not mean that dead people get a second chance. Jesus could go proclaim the good news to those who were saved through faith, but those who rejected God in life have no way of changing their situation after death (Luke 16:25-26).

To summarize: while Jesus’s body was in the tomb, His spirit went to be in what He called “paradise.” This “paradise” may have been the good side of “the place of the dead,” or Hades/Sheol. But He did not go to Hell to be punished. And, most important to our own lives today, there is no second chance to accept Jesus as Savior after death. The application is to trust in the gospel now, and share the good news of Easter with others while you can.

Story:
On Sunday, some women who were friends of Jesus went to visit the tomb where He was buried. However, when they got there, the big stone had been rolled away, and the tomb was empty. An angel told the women that Jesus was not there, because He was alive! Jesus had come back to life, just as He promised. Filled with joy, the women ran to tell the disciples the amazing news. Jesus Himself appeared to the women and the disciples and spent more time with them before returning to heaven. Jesus is still alive today. When we believe in Him and trust that He paid for our sins on the cross, we can be forgiven and have eternal life. Jesus promised that one day He will come back, and everyone who trusts Him will be with Him forever!